The Difference Of A Year

A lot of things can change in a year.  People we know and love may disappear, through death or just going off the grid.  We age. We change.  Things change.

One year ago, Ball Memorial Hospital in Muncie, Indiana, was at the center of a case involving the mistreating of a trans woman in the Emergency Room.

Erin Vaught was treated inhumanely as she was dehumanized and disrespected in every way. She entered the hospital, coughing up blood, and was continually called “he-she” and “it” by the hospital staff.

According to Vaught, “Nurses would pop their heads in saying so is it a he or is it a she?”

When Vaught went to the bathroom, she says the nurses then began to badger her partner.

Her partner told them, “She is my wife, not an it.”, to which they replied, “We don’t know and until we know, he’s going to be an it.”

Several hours went by and Vaught asked when she would be seen by a doctor.

The nurse said, “We don’t know how to treat someone in your condition.”, to which Erin replied, “What’s my condition? That’s what I’m here to find out.”  Her response was, “No, not that condition.  The transvestite thing.”

Completely humiliated, Vaught walked out and later voiced her frustration on the hospital’s Facebook page.  Overnight, she had hundreds of supporters, but it still took the hospital several weeks to even acknowledge the accusations.

Advocacy groups had filed complaints with the hospital in hopes that they change their behavior and provide everyone with the care they deserve.

“You don’t have to accept me,” said Vaught, “but I just want my rights.” 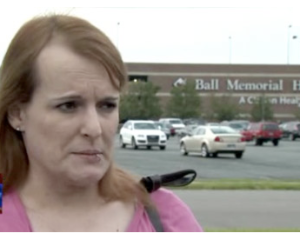 “The hospital is committed to providing care with respect, dignity and courtesy…all staff are trained to embrace and act in accordance with core values…including compassion, respect and customer care.”

The hospital reached out to Vaught and two advocacy groups. Together they came up with a plan to help improve services to everyone.

The hospital is now getting high marks for its commitment to providing a safe place for lesbian, gay, bisexual and transgender patients.

“We are committed to providing high-quality care, free from any type of discrimination, ” hospital President and CEO Michael Haley said in a statement.

A hospital spokesman said, “We started mandatory training in September (2010).  The training is required on a yearly basis by all employees.

The Healthcare Equality Index, released in June by the Human Rights campaign, found that the vast majority of American health care facilities did not have LGBT-inclusive patient non-discrimination policies last year.  It rated 87  respondents on policies related to LGBT patients and families.

Since then, the gay and lesbian civil rights organization reports, Ball Memorial has been among several respondents that “have updated their policies to protect patients from discrimination based on sexual orientation and/or gender identity.”

The hospital spokesman said the hospital will work to “constantly improve” its policies to make sure that “everyone feels they have a safe environment here.”

It is to be applauded that the hospital could make such a change in just a year’s time, but it is sad that it had to be forced into such actions.  A hospital is meant to be a safe haven for all and a place of healing.

She grew up in an Indiana town Had a good-lookin' mama who never was around But she grew up tall and she grew up right With them Indiana boys on them Indiana nights Well, there are partial truths above. Being from Indiana, I did grow up in an Indiana town. I did not have a good lookin mama, but she was always around.'I did not grow up tall, but I suppose I grew up right. I spent lots of time with Indiana boys on Indiana nights. It's because I was one. Still am in some ways. Certainly not in others. My transitional journey has begun. Goodbye to my male self and hello to this wonderfully feminine world in which I was meant to live. At the age of 45, I am beginning my true journey to self and home.
View all posts by Jennifer →
This entry was posted in Transgender Life and tagged hospital, ignorance, LGBT, LGBTQ, life, lifestyle, love, mistreatment, TG, transgender. Bookmark the permalink.

2 Responses to The Difference Of A Year